THE MUNICIPALITIES OF ELBA

Book your ferry on line

The 8 municipalities of Elba 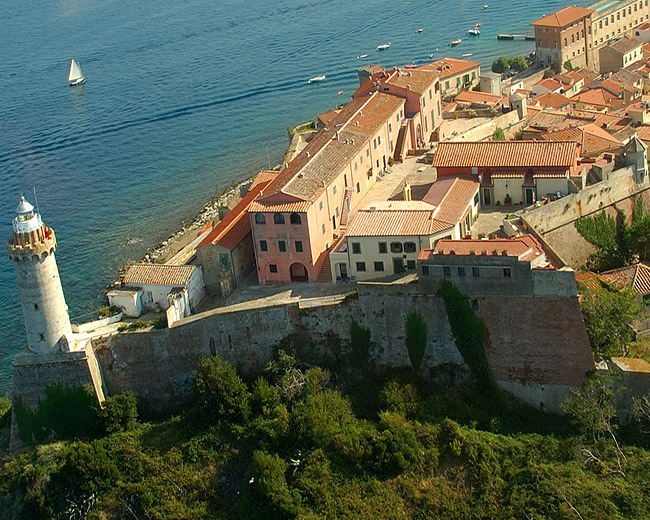 Chief town and main port center, it is situated on the north-east coast, on a promontory that closes the gulf towards the north.

Portoferraio is one of the island's most ancient towns: its origins date back from the Ligurians, the Etruscans and the Greeks, before becoming a Roman colony called Fabricia.

The plan of Portoferraio, as we can admire it today, is due to the will of Cosimo I dei Medici who after changing the name to Cosmopoli, in 1548 also began the great defensive works.

In 1814, the city gave refuge to the exiled Napoleon Bonaparte. Other places of historical and cultural interest are the Romanesque Church of Santo Stefano alle Trane, the high-ground Etruscan Fortress of Castiglione, Villa dei Mulini and Villa San Martino, the International Art Center of Italo Bolano, the Pinacoteca Foresiana and the Botanical Garden at Ottone.

In the municipality of Portoferraio is the San Giovanni Spa. Also administrated by the Commune of Portoferraio are the localities of San Giovanni, Schiopparello, Magazzini, Ottone, Carpani, Bagnaia, San Martino, Biodola, Viticcio and the Island of Montecristo. 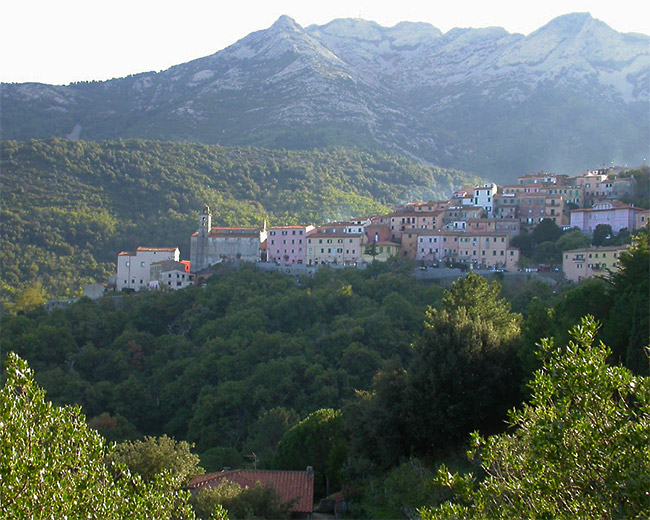 Marciana is situated on the slopes of Mount Capanne on the west side of the Island of Elba at 375 meters above sea level. It is one of the most ancient settlements on the island, its foundations dating back to the year 35 BC.

The Archaeological Museum in Marciana gives evidence to its very ancient past.

The vegetation is luxuriant: there are ilexes, pine-trees and chestnut trees, the cool, fresh climate giving this land a mountain atmosphere although the sea is only 5 kilometers away.

There are excursions to Mount Capanne on foot or with the cableway just outside the town.

Just 3 kilometers from Marciana is Poggio Terme; here there is a spring of water low in mineral content which has curative properties.

The Marciana area is covered with vineyards that produce an excellent wine.

The Commune of Marciana also administrates the hamlets of Procchio, Chiessi, Sant'Andrea, Patresi and Pomonte.

This ancient fishing village is the smallest commune in Tuscany and became autonomous in 1884 when it separated from Marciana Alta. It is arranged in a semicircle around an inlet on the northwest coast and its territory is limited to the coastal strip.

The small harbour, is a favourite destination for sailing enthusiasts. Moreover, since the beginning of the century, Marciana Marina has instructed an elite of sea captains who sail along all the routes of the Atlantic Ocean. In the period when the island was producing and exporting salt tuna, one of the two tuna fishing nets of the island was situated on this coast. 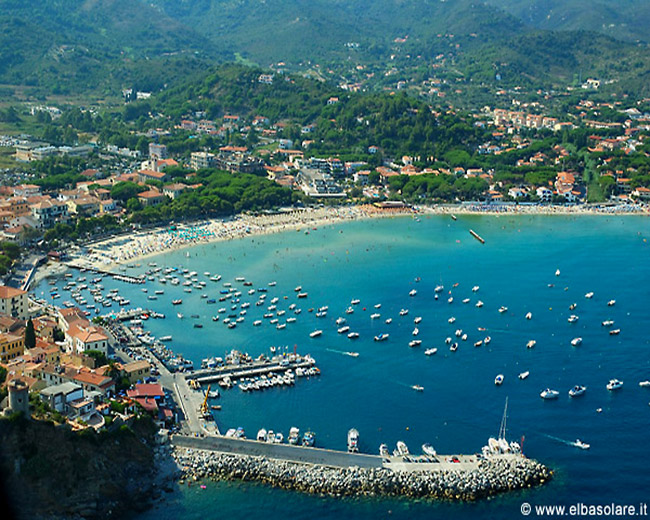 This municipality is situated on the southernmost point and flattest area of the island, extending from the gulf of Lacona to Pomonte.

Marina di Campo once a fishing village spread adjacent to the wide sandy bay, today it is the main town of the Commune of Campo nell’Elba. Its beach, the longest on the island, is the one most frequented during the summer season.

A cylindrical tower rises on the western end of the bay of Marina di Campo and was built as a defensive system, probably during Pisan rule.

The Town Hall is situated at Marina di Campo, a seaside resort facing the bay bearing the same name. In the area there are many archeological finds giving evidence to the ancient settlements.

Today the area of Campo has excellent hotels and gives the tourist the possibility to choose between a social and lively holiday on the coast or a peacefully isolated stay in the hinterland.

Inside the Commune of Campo there is the La Pila Airport with connections to a few Italian and European cities. The communal district of Campo also includes Cavoli, Seccheto, Fetovaia and the Island of Pianosa. 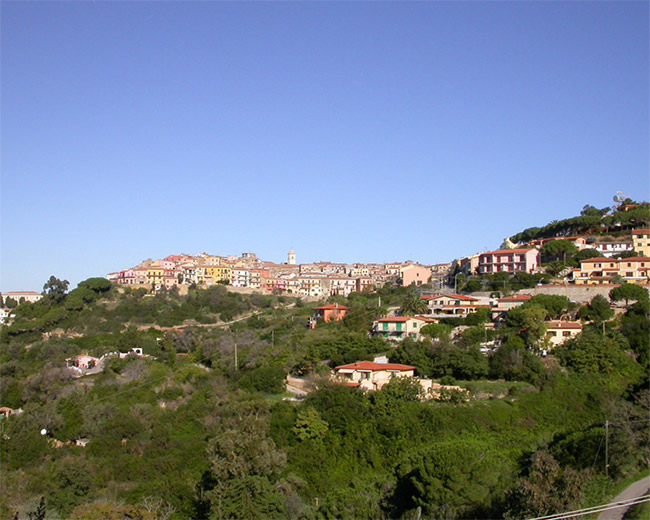 Capoliveri is situated in the southeast of the Island of Elba, on a ridge of Mount Calamita, 167 meters above sea level.

Its name and origin date from the Roman period: Caput Liberi is Latin for Liberus' Hill, meaning sacred to Bacchus, and since ancient times has been a land of vineyards and excellent wine.

Places of historical and cultural interest are: the Sanctuary of Madonna delle Grazie, the Focardo Fortress and the Chapel of San Michele Apse.

The main centers inside the communal district of Capoliveri are: Lacona, Naregno, Lido, Pareti, Morcone, Innamorata and Cala Grande. 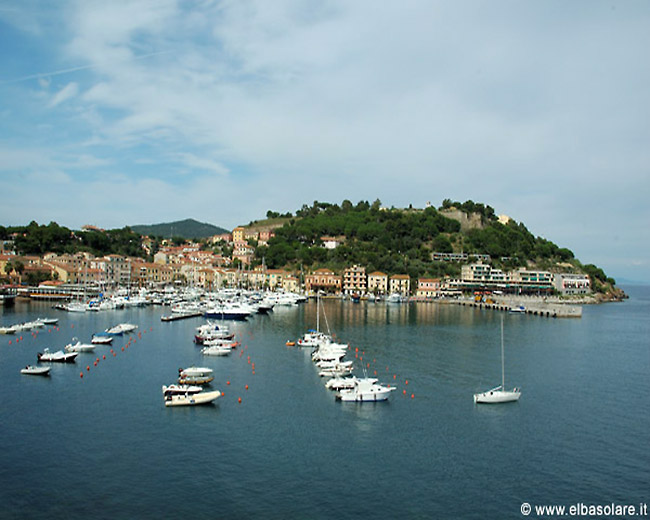 Porto Azzurro was renamed in 1947 when it was allowed to change from its old name, Porto Longone, which identified it with the prison housed in the Longone Fortress. The small town opens onto the Gulf of Mola, the widest bay of the eastern Elba coast and has a well protected port in which ferry-boats and tourist boats regularly moor. This fishing and agricultural village is today a famous tourist resort.

Just a few kilometers from Porto Azzurro is "The Small Mine" (Piccola Miniera), a reconstruction in reduced scale of a mine and of the life inside a mine.

Places of historical and cultural interest also are: the Sanctuary of Madonna del Monserrato and the Spanish Church of Cuore Immacolato di Maria. 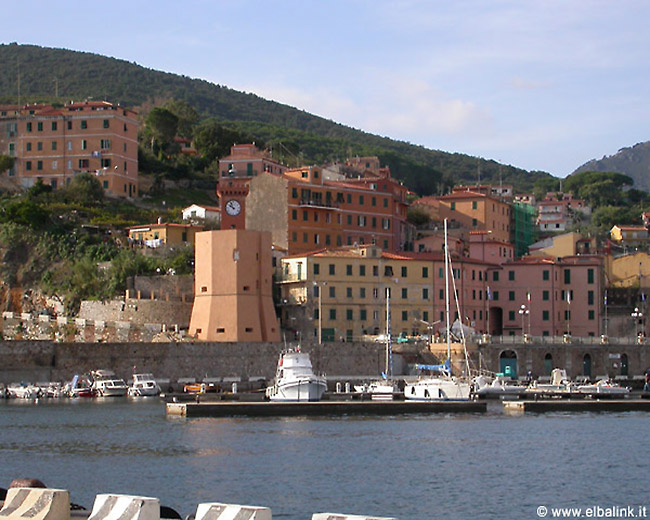 Rio Marina is situated on the eastern part of the island inside a small inlet surrounded by hills. These hills are characterized by a red earth which is due to iron oxide mining activity in the past.

In this area the iron oxide extraction took place as far back as the Etruscan period and was, together with fishing, the main activity of the Rio Marina inhabitants until just a few decades ago.

Today Rio Marina is a seaside resort with all the necessary facilities for its visitors. The autonomous Commune was established in 1882, when it was separated from Rio nell'Elba with which it still shares its history. From the port there are connections with the mainland, as an alternative to Portoferraio.

Places of historical and cultural interest are: the Church of San Rocco, the embattled tower in the port and the Mineral Park of the Island of Elba.

The district of the Commune of Rio Marina also includes the village of Cavo, which can also be reached on foot in order to also visit the charming Tonietti Mausoleum.

Other hamlets are Capo d'Arco, Ortano and Porticciolo. 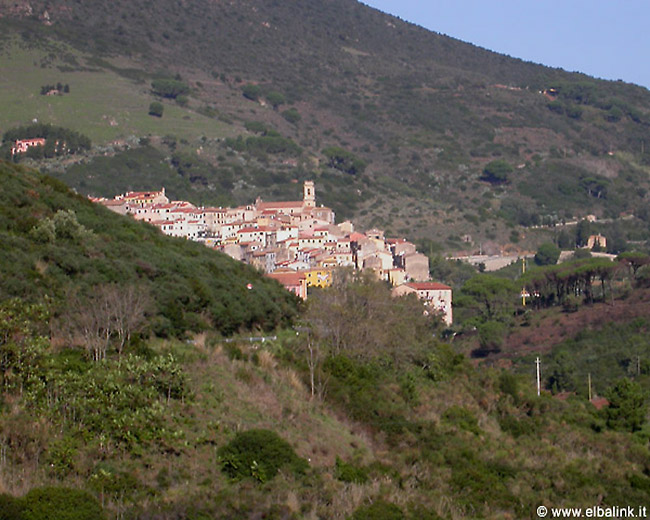 This village is perched on a hill at about 170 meters above sea level, on the northeast side of the Island of Elba.

It is among the most ancient villages of the island - its origins date from the Bronze Age - and preserves various traces of its past which include marine archeological finds.

Rio nell'Elba, famous for the iron mines that date back to the Etruscan period, was the most important mining center until the shut down of all the ore bodies.

There is a wide variety of minerals exhibited in the local museum, the "Museo della Gente di Rio". Other places of historical and cultural interest are: the Volterraio Castle, the Parish Church of Santi Giacomo e Quirico, the Oratory of Santa Caterina and the Church of Santissima Trinità. The Islet of Cerboli is also administered by the Commune of Rio nell'Elba.